Jens Harald Quistgaard (1919 - 2008) was a Danish sculptor and designer. He was initially trained by his father, sculptor, Harald Erik Einar Quistgaard, subsequently serving an apprenticeship with Georg Jensen. Jens Quistgaard put Danish design on the world map, not least with his designs for the kitchen, including cutlery, pots and pans. Jens Quistgaard has been awarded many prestigious prizes including the Lunning Prize and several gold medals at the Milan Trienalle.

The term Danish Functionalism is used to describe the Danish branch of functionalist architecture, which had its heyday in the 1960s. Danish Functionalists focused primarily on functionality at the expense of aesthetics and produced a number of buildings that are characterized by straight angles, flat roofs, and a rugged kind of austerity, evoked by the minimally decorated concrete slabs that the buildings themselves are made of.

Jens Quistgaard was an original thinker, an entrepreneur, an innovator and a prolific designer. Through his collaboration with Ted Nierenberg, Quistgaard designed more than 4,500 products before his death in 2008.  One of his most successful furniture designs is the distinctive Quistgaard Safari Chair, designed in 1965. Quistgaard Safari Chair is one of a kind and today is considered an international design classic.

Quistgaard's designs have been awarded numerous prizes and are in the permanent collections at both the Museum of Modern Art in New York and the Louvre in Paris. 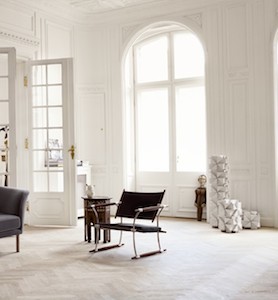