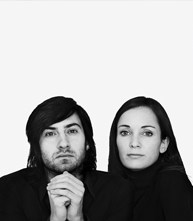 GamFratesi Design Studio was established in 2006. Stine Gam (born 1975) and Enrico Fratesi (born 1978) belong to the latest generation of furniture architects. Stine is Danish, while Enrico is Italian and together they represent a new interpretation of the meeting between Danish and international design traditions.

GamFratesi's design takes its creative drive from a fusion of tradition and renewal and in an experimental approach to their chosen materials and techniques. With their dual traditional background, they draw on the classic Danish furniture and craft tradition as well as the classic Italian intellectual and conceptual approach. Understanding a tradition and addressing it actively in the workshop makes it possible to expand on it. From this cross-cultural substrate they create furniture that respectfully reflects tradition while also featuring unique embedded stories, symbols and associations, often expressed in a minimalist idiom.

"Our work is balancing between the traditional and surprising. Often it takes just a small detail to achieve or break an expression, and we are very curious about that. We work strictly with the Scandinavian approach to crafts, simplicity and functionalism, but there always happens to be a strong emotion to concept and story behind each work. Contrasts are often the center of our inspiration. Both in work and daily life we are constantly confronted with contrasts, and we do work a lot with references and respect to traditions in both our cultures. We both have roots in strong design cultures. Studying, researching and moving constantly between our two countries, it has become such a natural part of us, that it will also show in our work."

GamFratesi aim to create furniture that illustrates the process and the techniques that created it, and which reflect a persistent exploration of the diverse border zone between harmony and disharmony.

Design partnership, GamFratesi embodies the meeting between Italian and Danish design. The considered and minimal approach of the Danish design tradition is combined with a sense of quirkiness and the desire to tell a story. With GamFratesi the contrasts are often key to their inspiration. They work strictly within the Scandinavian approach to craft, simplicity and functionalism but there is always a strong emotional pull towards concept and the story behind each piece.

When design connoisseurs try to predict who is going to be the next Arne Jacobsen or Hans Wegner, GamFratesi comes high on the list and since the parnership formed in 2006 GamFratesi has received a long list of design awards.

With GamFratesi's Masculo lounge, designed in 2008, and Masculo chair, designed in 2011, we see the emergence of a new, potentially classic furniture series from Gubi.

"With the design of Masculo chair our idea was to experiment with a kind of contradiction between a partly classical design as deeprooted in the Danish furniture tradition, and challenge it in the combination with contemporary dynamic lines and translations of materials and production techniques. We required to examine the impact of the meeting between something partly traditional, but in an atypical context, and it appears to the effect of this contrast, that the chair is to be situated some interesting place in the borderland between harmony and disharmony." - GamFratesi